skip to main | skip to sidebar

Playing Catch Up and Catchin' Some Rays

On April 25th, I completed my first 1/2 marathon. That's right - 13.1 miles of running. My goal was to finish in 2:40 (not a fast time but steady and in keeping with the pace I'd been training at). The race was AWESOME!!! Here are some photos: 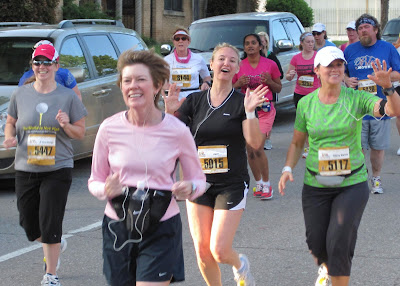 The first 8 miles were absolutely a piece of cake. The most challenging was probably mile 11, but that's because my running partner and I missed the flag for it and I thought mile 1o was just lasting forever. My final time was 2:34:43, which was a pleasant surprise. Aaron and the kids, his parents, and my sister and bro-in-law were all there to cheer me on (my parents were in Kansas City). 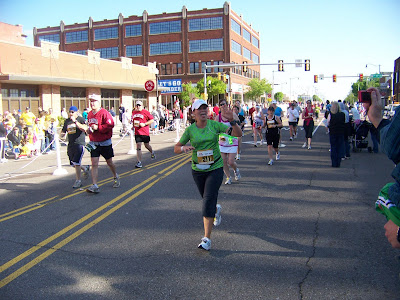 Here we are at the finish line. Sorry the pic's so small - I took it off of Facebook. It was a pretty chilly day for late April but great for running. We enjoyed some cheeseburgers and chocolate milk at the finish line then a champagne toast back at the hotel. Also enjoyed a ice cold beer while in my ice bath, figuring I was already freezing so what was a few more degrees of cold!

The weather quickly warmed up and we've spent lots of time outside. Here's Harper G running around (does she do anything else!?!) with a mower Caleb loved to play with at her age. Apparently, he wasn't quite ready to part with it, as seen by the expression on his face. 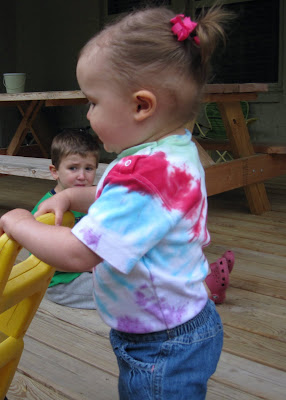 In April, Caleb had some major dental work done - 4 fillings and 2 crowns. Before you can ask, yes, we do brush his teeth religiously, and no, we didn't fill his bottle with Dr. Pepper when he was an infant. The dentist recommended being completely under for the procedure. He did a great job and is very proud of his silver teeth. We're just excited that the crowns are on teeth that he'll eventually lose.
As the school year came to an end, both kiddo's classes had what Riverfield calls "culminating events." Caleb's class had been on a yearlong investigation to learn more about the school's mascot, Big Blue. They planted a garden outside their classroom with blue flowers and worked with the school's art teacher to construct a bird bath and other garden ornaments out of clay that they formed, glazed, and fired. Big Blue's Garden Party celebrated the end of this investigation, complete with an appearance by the mascot, autograph signing, and popsicles. Caleb's in the grey and navy striped shirt (the one that's about a half a head taller than everyone else). 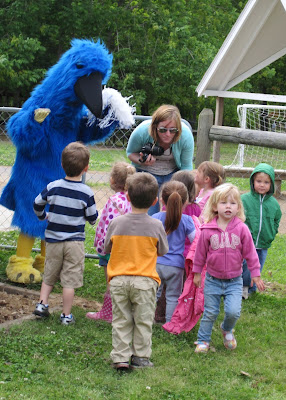 Getting some love from Big Blue. 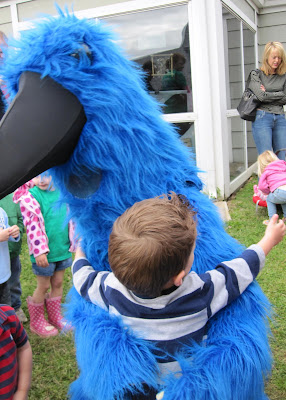 Harper and her other Butterfly friends celebrated with a Garden Party of their own. Families came to school on a Sunday afternoon to plant shrubs and flowers and create a butterfly-shaped mosaic stepping stone for the Butterfly garden. They also got to explore the Toddler classrooms, which was great because Harper's older infant class moved into a vacant Toddler class for the summer so they're getting a jump start on next fall's experiences. 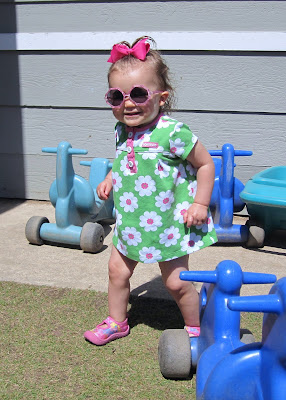 Another end-of-year event at Riverfield is our Street Party, where the 5 student rock bands (we have Oklahoma's only school rock band program) perform on a stage on our back field with some original, classic, and current rock songs. Caleb and I went - here's his game face. 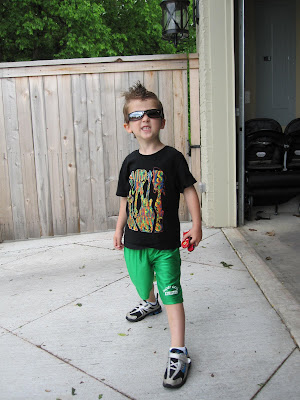 Caleb and his BFF Anthony rockin' out. 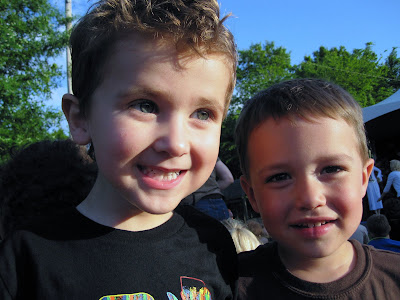 Alissa, April, and I ran the Full Moon 5k a few weeks after the 1/2 marathon. I cut quite a bit off my time, which was nice, and the free beer and live concert afterward were fun too. 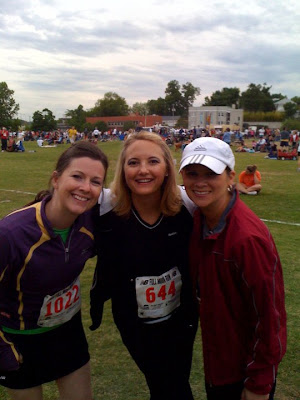 The weekend after Mother's Day, Caleb and I ran in the Oklahoma Aquarium Fun Run. It was just a few miles from our house on a rainy morning. Caleb was awesome! With the exception of a few walking steps, he ran the whole mile!! The thing he was the most unsure of was pinning his racing number to the back of his shirt. Grandma and G-Dad came to cheer us on. 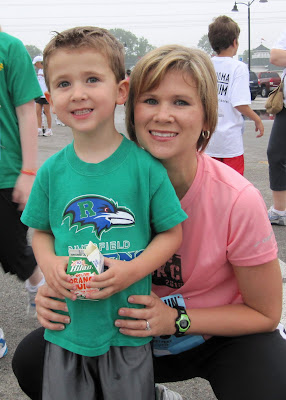 Caleb received a t-shirt and ribbon but was most excited about the chocolate milk at the finish line.
Later that day, my girlfriends and I got together with our moms for a "Moms and Mimosas" brunch. It was potluck-style with some super tasty dishes. My mom wasn't feeling all that well but did make an appearance. It was a fun way to celebrate the best moms ever (well, my mom being the best and the others coming in a close second). Also, you might notice the blonding and chopping off of my hair. I was tired of in-between, not long, not short hair. So Tara, my hairdresser, chopped it off and made it a fun summer color. 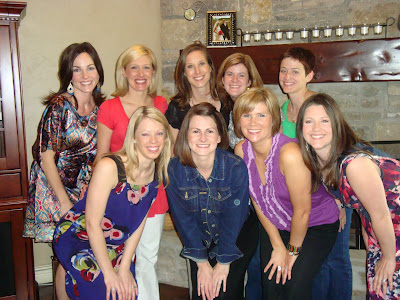 The kiddos on the last day of school. Since we go to Riverfield in the summer too, our schedule isn't too different for June, July, and August. 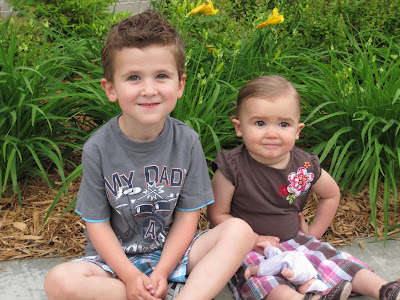 As a point of reference, here's the first day of school last fall. 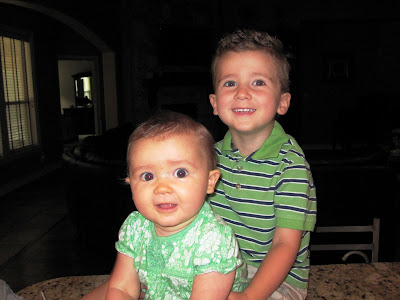 We've been working on letters and letter sounds with Caleb. Apparently Harper's picking up some of it too :)

We've had a great summer so far. Here's photo of Harper, Ellison, and Landon at a concert at a local park. The big kids didn't come prepared for the splash park section of the park, but that didn't stop them from getting soaked! 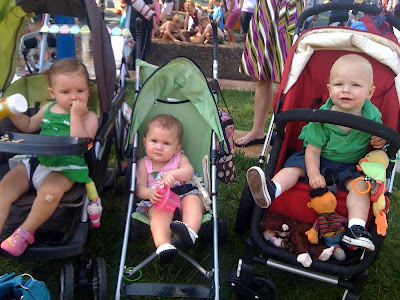 Caleb's new favorite hobby - urinating outside. This was the first time we caught him. He asked Aaron, who was inside, "Dad, can I make the grass yellow." Aaron thought he said, "Does it make the grass yellow?" to which he responded with an affirmative "yes." And here's the result. (Wonder when he'll realize he doesn't have to pull his pants and underwear all the way down?) 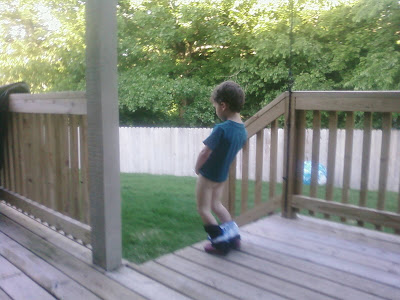 We've enjoyed lots of time in the backyard with our little pool; it's just big enough for a raft for me to float in while C and HG nap. And now...you know why I've been a blogging slacker: I spend potential update time vegging in the wading pool. 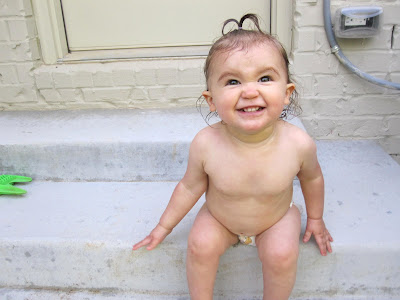 Harper's not exactly sure about the water in a bigger pool- she doesn't want to spend time in her float but isn't content with me holding her. She loves our little one though. 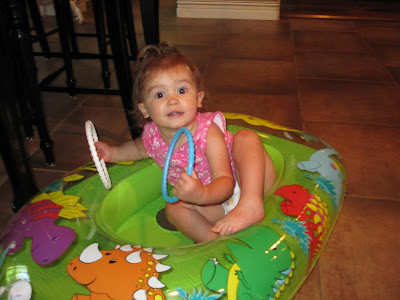 Owen, Aidan, and Caleb swimming at Aidan's grandma's house. Caleb has really turned into a little fish this summer and is making great progress at swimming lessons too. 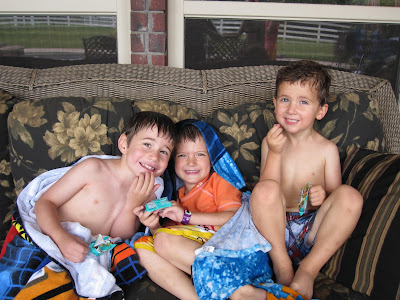 Both kids are loving summer at RCDS! They come in water clothes each morning, play in the water on their playgrounds then change to regular clothes. Here's grown-up Harper Grace and a classmate playing in the home living area of their new classroom. 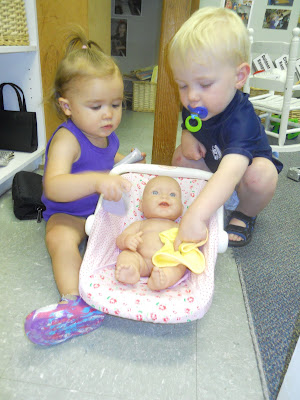 My friend Mary-Catherine teaches Spanish at school and is working most of the summer in Caleb's class. As a result, he's picking up lots of Spanish and is pretty proud of himself.

Last weekend was Father's Day. Aaron's big present was a Hasty Bake Oven. Google it if you've not heard about it. Trust me, you don't want to ask him about it or he might not stop talking for a few days :) I think we'll really get a lot of good use out of it; you can grill, smoke, and even cook (yep, as in bread, pizza, and cakes). Hopefully the temps will not be too unbearable this summer so we can break it in nicely. We celebrated later in the day with my parents and Morgan and Brian. Shout out to Dad and Aaron, two of the best Daddides in the world! 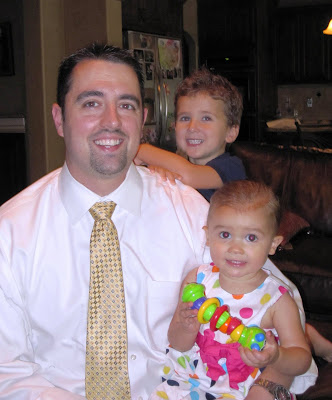 Our friend Charity taught a cake camp this week and saved a special Tow Mater-shaped cake for Caleb. Note the patronizing "Mom, hurry up and take the picture so I can eat this ASAP" smile. And, you'll see that Harper G destroyed her piece of cake too. 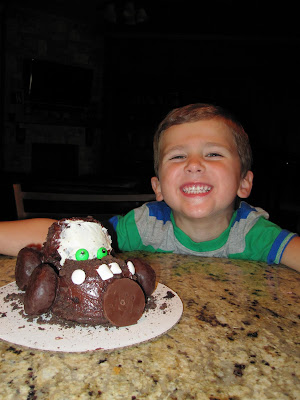 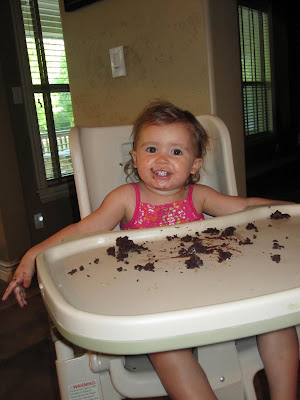 Harper is certainly coming in to her own. Her vocabulary expands daily and she's getting to be quite the drama queen.

She's also learning lots of songs. This is a little hard to get at first, but I promise it's Twinkle Twinkle.

She mastered naming and pointing to various body parts awhile ago but this is the first time she's cooperated on camera.


OK, the end of this post is a little Harper-centric. However, overall, she's gotten a lot less blog time than Caleb. So here's little Miss Thing working on her jump jump jumping.
Other items of note:
Hope you are each enjoying your summer. We're off to the beach in a few weeks. Or, should I say, we're scheduled to be off to the beach but the oil spill could alter those plans. We'll figure it out, I guess. Stay cool out there!!

Posted by Emily, Aaron, Caleb, and Harper at 11:55 AM 2 comments Links to this post

Emily, Aaron, Caleb, and Harper
We started blogging shortly before Caleb was born and try to update as we can (though I've been really bad since Harper was born!). We hope friends and family are able to keep tabs on us easily this way. Enjoy!