skip to main | skip to sidebar

Not much time to write this week so here's the Cliff's Notes version of Week 26 (6 months!!).

Caleb officially turned 6 months on Sunday. It was like he knew it was a big day- he woke up happy and playful and stayed that way all day. He was actually a pretty big ham all week, I think it's just the age/stage he's at right now.
He was being so silly playing with his tongue. The new advancement here is that if you stick your tongue out several times in a row, he'll study you then stick his out too. This was on Saturday, right before we met some friends at Tin Star (love it!) for lunch. As you can see in the pic, he was having a great hair day too. 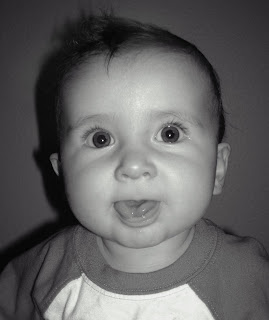 This one is from the bath. Each night, I help stand him up as we transfer from the bath to the towel to dry off. He stands all the time but is especially proud of himself when he does it in the bath. We always use a second washcloth to dry off his face and hair. Somehow he ended up looking like was wearing a beret in these. 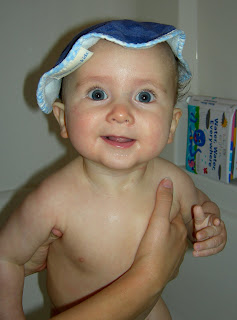 We bought the "big boy car seat" several weeks ago but just hadn't made the switch. Then the pediatrician commented that he was definitely too long and too heavy to be in the carrier any more. So Sunday's drive to church was the inaugural ride in the new car seat. What a big boy he is! 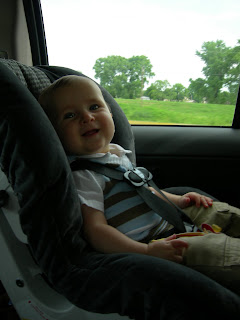 As I've written for several weeks now, this week is PAGEANT WEEK!! The first event of pageant week was a lunch on Sunday afternoon. Caleb was a charmer, he even had his own VIP Guest badge so he has full access to the Mabee Center this week- ha! He pooped out in line for food (Aunt Heidi is wonderful at putting him to sleep) so then he was passed over to Bob while Heidi ate. The picture is of Caleb, Bob, and Lauren. Not too shabby to have 2 pictures with Miss America by the time you're 6 months old, huh? 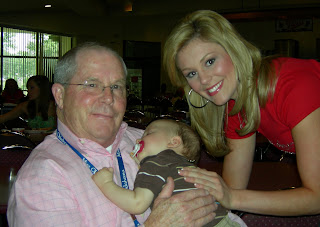 Understandably, this blog usually revolves around Caleb (like you guys would want to read about just Aaron and me?!?). But this picture was too hilarious to pass up. It was us heading out to Aaron's brother-in-law's 40th birthday party on Friday night. It was an 80s theme with appropriate dress required. How awesome do we look? The party was a blast with a great 80's cover band called the Spazmatics that play at the House of Blues in Las Vegas, but were here to play Tim's party. We were some of the more tame costumes of the night, believe it or not! 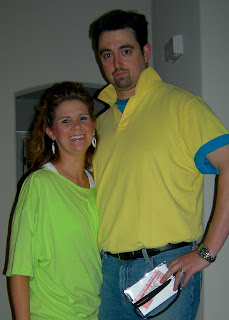 OK, heading to bed. Tomorrow is the day the Teen contestants move their stuff into the Mabee Center so we'll be going like gangbusters the rest of the week. I was actually in bed around 11:15 but Caleb woke up at 1:00ish. We had a little chat with him about how this week, of all weeks, it would be great if he could sleep through the night. We'll see if the pep talk works :)
Have a great week!!

Caleb just seems to be such a happy lil' guy!! I love his little grins! The 80's pic...ya'll are one stylin' couple!! You should keep that look..haha..ok maybe not :) Hope ya'll had fun!

Caleb is soooo cute!!! I love all of his expressions!

Emily, Aaron, Caleb, and Harper
We started blogging shortly before Caleb was born and try to update as we can (though I've been really bad since Harper was born!). We hope friends and family are able to keep tabs on us easily this way. Enjoy!